I've installed alarm systems for a long time. And I've seen a lot change over the years.

Back then, to get a wireless system meant that you were going to pay more for the system than you would for a wired system with the same equipment. Most customers back then, in my experience, would rather have the technician pull the wood trim, lift the edge of the carpet, fish wires through soffits and under floors, and even expose wires in garages and closets, than pay the extra $200 that was charged to switch to wireless.

But, times have changed. Now, a lot of modern security systems are wireless first, with wired capabilities second. In fact, some modern systems can only utilize wired devices by using a hardwired to wireless convertor to make the wired devices connect to the otherwise wireless-only panel.

But here's the thing… No matter how wireless a modern system may be, you still need to be able to run wires in this industry. Battery technology just does not allow certain things to be convenient as a wireless device. Yeah, there are totally wireless cameras available, but you're recharging them or replacing their batteries very often. A camera plugged into an outlet makes for a better customer experience. On top of that, the alarm's control panel always needs plugged into power.

And knowing how to run wires in a completely finished house, while hiding the wires is a skill I would not want to give up. My many years of installing mostly-wired systems have allowed me to hone my skills to a level that not only “wows” a customer, but also most other technicians that see the end result. These are skills that I attempt to instill in my techs.

But, just having hidden wire runs is not enough. You need a system that is easily serviceable, and neatness is often the key here, too. Take a look at the two pictures to the right. The one on the top is a pig sty – no other way to put it. When you start touching things inside the panel, you risk wires coming loose, without it being obvious where they go back to (not to even mention the circuit supervision issues in this panel).

But, the panel in the picture on the bottom (which I installed), even though it has more wires and devices inside the panel, you don't have that issue. Because you don't have a ball of wires weighing down on the individual wires under their terminals, loosening a terminal to pull out a wire does not result in all the other wires under that same terminal springing free. That makes this panel much easier to service than the top one. Less trouble-prone, too.

So, doing a high-quality job from start to finish is important to me. It's part of why I decided to become an ADT dealer – to provide quality work and service as it should be done. Over the years, I've seen quality in this industry slide further and further. As an ADT dealer, I still intend to adhere to my standards (even in this age of “Wireless, Wireless, Wireless!!”), and push my techs do the same. 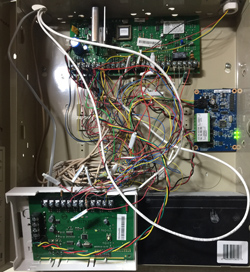 This panel is a service nightmare. Even when just changing the battery, you risk a wire coming loose causing a problem. Plus, with the resistors at the ends of the wires, you have no circuit supervision. 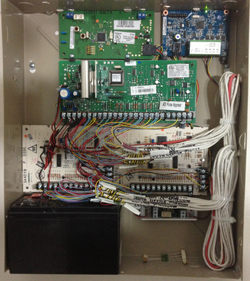 This panel has more wires and devices installed in it, but because it is neat, without the wires being strained, servicing this panel will be easy for the next tech.